Purchase your tickets now or become a FoS (Friend of Subtext) by Donating or Subsidizing a part of a show.

Subtext is dedicated to bringing powerful stories to the stage through an exploration of the meanings found inside, under, and between the author's words. 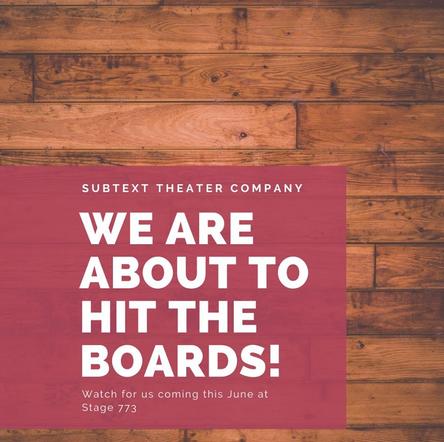 There is excitement building here at Subtext Theater Company as we are in the beginning stages of bringing a new Leigh Johnson play to the stage.

Subtext Theater Company's Managing Director John Oster announced on Tuesday, February 18th that Mary Ellen O'Hara has been selected to direct our June production of A Bump on the Leg by STC member Leigh Johnson. Ms. O'Hara is a professor at the University of Illinois at Chicago. Among other accolades, she holds a Masters Degree in Irish Theater from Trinity College in Dublin. She was selected from fourteen overall submissions to direct the production. Her theatrical vision and understanding of the script were obvious in her proposal and after interviewing her she quickly became a favorite candidate. Below is just a portion of her proposal that was submitted to the company.

"We live in an incredulous age. An age dominated by science. An age where science and statistical data are the only valid means of answering difficult and profound questions. Thus, when confronted with the complexity of suffering, we now feel compelled to turn to science to ease our pain, hold back the creep of time, and produce its miracles (even if we become a statistical anomaly).  It is from this mindset that the audience is invited into a pub and the world of A Bump on the Leg.

You will meet Jim: a charming old Irishman who offers to entertain us with a story from his youth. Jim acts as our guide, steering us from one life event to another. In learning of his past battle with cancer, we may fear at times for Jim, but we are never seriously worried --for Jim stands before us, smiling and observing the action. Thus, we do not ask if Jim will survive his cancer, but rather, how. And this is ultimately, what A Bump on the Leg shares with the audience."

Details of the production will be announced soon.

We are proud to share this story of Love, Faith, and Miracles to you.